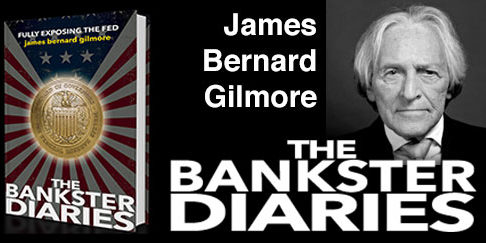 Destined to go down in history as the definitive expose on the sheer criminality of our financial system with detailed research of every point this book connects all the dots revealing the truth of the federal reserve. Release Datre: London, England, https://banksterdiaries.com – 20th of April 2016

The Bankster Diaries, Book I: The Federal Reserve – Focuses on the Federal Reserve which is foundation-sone of the entire global financial system. It has been engineered into the planetary status quo as comptroller and overlord of all central banks. Through it’s ownership of BIS and therefore all banks and banking on earth it is a self-serving enterprise backed up by the quadrillion dollar US war-machine.

Ambassador James Bernard Gilmore delivers a shattering chronology of evidenced proofs exposing the Federal Reserve’s 12 privately owned corporations which is the de-facto ‘owner’ of all governments, whose power base is in default of its original charter. This generational fraud and treason will be the death-knell to a global conspiracy which harks back centuries, and which has forced billions of souls into bonded-slavery. Once people of the world realize the awful truth – our socio-political landscape will never be the same again.

US born James Gilmore is an Ambassador-at-Large to Liberia and has devoted twenty-five years of his life researching the background to this ground breaking book. Widely travelled, he has lived in Liberia, Sierra Leone, various EU states and Switzerland. Currently domiciled in the United Kingdom he has served as economic consultant to various sovereign State Presidents, Governors, Dictators, the CIA, Mossad, MI5 and MI6. The Bankster Diaries is first in a trilogy of books set to shatter all common perceptions of modern history, leaving readers aghast at the enormity of global conspiracy which remains upon us. Shedding light on the vain process of voting for the controlled opposition of the usual candidates in the past 2016 US elections.