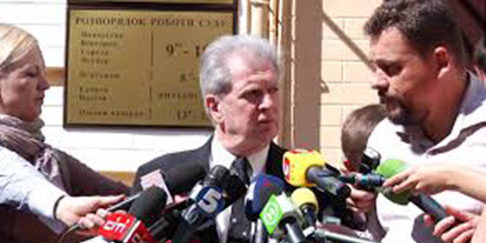 Walsh is an international constitutional lawyer, practising in human rights and constitutional
issues for over 30 years in the UK, Australia and other countries. He was here to observe the trial of
former Prime Minister of Ukraine, Yulia Tymoshenko, was also a delegate to the Human Rights
Institute in London and on this occasion working alongside a delegation from Humanitad.

His attendance was prompted in response to reports of violations regarding the legal process and
the human rights issues, having seen some of the transcripts and heard of international concerns
from European countries and the United States. These concerns include a lack of time to prepare
the defence, reports that on one occasion the proceedings continued without Ms Tymoshenko or
her lawyers present in the court, reports about the health of Ms Tymoshenko and complaints of
numerous procedural irregularities effecting the fairness of the trial.